THANK YOU TO OUR DONORS! 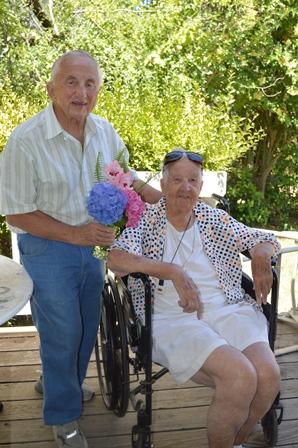 Don Nordine, a 79-year-old Roseville resident, has volunteered for Seniors First since 1989.  He began as a delivery driver for the Meals on Wheels program and enjoyed that role for 23 years, along the way meeting clients that became part of his weekly routine.

Don became known for his friendly delivery as well as the hand-picked roses from his garden that thoughtfully accompanied the meals.  Seniors First Executive Director Jamee Horning, then a volunteer herself at the Senior Cafe in Roseville, would scour local garage sales and Goodwill stores to purchase inexpensive vases for Don’s bouquets.

When the funding model for the program changed in 2012, Don signed on to become a friendly visitor to one of the seniors on his route, 92-year-old Laura Kahl.

Don volunteers because of an innate sense of obligation.  “I believe that we’re put here on this earth to help one another,” explains Nordine.
During his weekly visits, Don reads to Laura, short nonfiction stories from The Guidepost and a little humor from Reader’s Digest.  And, Laura says, still brings her flowers.